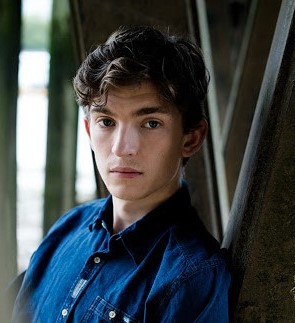 John is quite tall, with dark hair, deep-set, slightly squinty blue eyes, and a face which often looks too narrow for the various features stuck onto it, especially his prominent, rather beak-like nose. More remarkable to most than any of the accidents of his appearance, however, is his demeanor; his awkwardness with most people is almost a physical force, regardless of whether it takes the form of surliness or a sort of old-lady fussiness, as though he were in a very cluttered room full of very fragile things. When he is relaxed - something that generally only happens when he is at home, with his siblings, with his closest friends, or out birdwatching, though it occasionally happens in less comfortable situations if he is allowed to get to rambling about a subject he likes - he is almost unrecognizable to some, aside from distinct mannerisms which make many people - even those who don't know he is a passionate amateur ornithologist - think of birds, especially corvids, the group he feels the strongest affinity for.

John was born in the Canadian province of Manitoba, the second of three sons of a single mother, Samantha Breaman. He only lived with his biological mother until age four, but by that time, was quite convinced that she liked him less than his older brother Paul or younger brother Joe; his assessment of this was, unusually for him, correct, as Sam struggled with him both because of his idiosyncrasies and because he bore a strong resemblance to his biological father, whom she'd had a bad relationship with. This became largely irrelevant to him after age four, however, as Sam was arrested for hexing a Muggle landlord; this led to John and his brothers eventually joining the household of Chris and Alison Umland of Calgary, Alberta, and to John becoming so devoted to Alison that involuntarily magical outbursts were his usual reaction for many years to any suggestion she wasn't his 'real' mother. Even as an adult, he refers to Sam simply as 'that woman' or 'Ms. Breaman' and has spoken to her only twice, both times against his will and with poor outcomes. He also became particularly devoted to the Umlands' daughter, his sister Julian, after he realized that an accidental magic episode didn't make her afraid of him, as Paul - a Squib - often was. He was homeschooled for the rest of his pre-Sonora years, but maintained a fairly vigorous social life as a member of the neighborhood Catholic church, a member of the Scouts, and a member of a book club for homeschooled kids in the area. It was at this club that he met Joan "Joanie" Murphy, a slightly older Muggle girl who became his chief rival for several years and therefore the first person he ever thought of as his friend. Their relationship abruptly became even more important, however, when he was ten and Joanie asked how he had thrown rocks at a bully in the park without touching them. Believing that the way she asked the question was a sign of some kind because of his love of C.S. Lewis, he told her the truth, and consequently spent years both doing science magic with her and dancing as fast as he possibly could to keep his family from figuring out that she Knew. He kept it up until he was seventeen, at which point his mother, Julian, and Joe found out after he and Joanie had a freak encounter with a mugger go wrong during a walk out in town.

John's family is, in his view, almost entirely nuclear: aside from his niece Cecily (they affectionately refer to each other as "Creature"), there are his parents (Chris and Alison), his four siblings (older brothers Stephen and Paul, older sister Julian, younger brother Joe), and, if he really must, his brother-in-law William Welles. He recognizes the existence of two sets of grandparents, two aunts, and an uncle, but is not particularly close to any of them and thinks of them relatively little when not going to his American Grandma Umland's fourth of July celebrations or visiting Granddad's parents' cabin in the mountains for a week each summer. As far as friends go, he is, due to his lifelong social awkwardness and difficulty understand the motivations and behavior of other humans, surprised and confused by the number of friends he has ended up with: aside from Joanie Murphy, there's Clark Dill, who he befriended in his first year at Sonora and has maintained a relationship with every since, and Sammy Meeks, who befriended him for reasons he can't begin to fathom in his seventh year and then just kept showing up and writing him and that one time tricking him into being civil to some gay Unitarians, and at school Aislinn Nicholls, though that was complicated by the realization that Aislinn had more than strictly platonic feelings for him. Then there's Lenore, but he prefers not to talk about Lenore.

John's Sonora years began well: he was Sorted into Aladren, which he found an excellently agreeable place to live from the start, not least because he had a room (and therefore a laboratory) all to himself, and while he completely failed to make much of a Chaser on the Quidditch team in his first year, he found his niche as a Beater the next year. He became involved in multiple campus groups, made his second-ever real friend, and learned how to bulldoze through assignments, both homework and in-class, so they took minimal time away from his reading and private projects. Becoming a prefect was therefore not his favorite thing, and things got yet more complicated when he found himself briefly with a roommate, whom he then determined was a werewolf (though his major objection to the determination was that everyone agreed there was no polite way to ask Jax to allow John to run experiments on him). It was not until his seventh year, however, that he was ever truly unhappy at Sonora; a random act of urban violence over the summer after his sixth year left him, as a seventh year, recovering psychologically from having been shot and also from having had fallings-out with the closest members of his family and having decided finally to cut contact with said family. To add worse to bad, his brother Joe tried to punch him on the first day of school and his best friend had graduated the year before, leaving him very socially isolated. It was at this point that Sammy Meeks decided to more or less 'adopt' him; wacky adventures have followed ever since.

After Sonora, John reconciled with his family and finally told the members of it who didn't already know about Joanie. This caused some hard feelings, but these were worked through, or else put aside in the face of the larger change to family life which occurred when his sister Julian married her boyfriend of several years. Soon after, John formally matriculated at university in New York state (amusingly, to his mind, switching countries with Clark, who was in nearby Toronto) at the school he had wanted to attend since age nine. Just before moving, he bought a broken wizard's tent - in effect, once its charms were repaired, a small apartment - from his elderly wizard grandfather and set it up in the woods, so he could both conserve money and determine his own level of sociability. All this was precisely to his liking, until the day he went on vacation with his family and allowed Sammy Meeks to stay in his tent until he returned. When he returned, Sammy announced she liked living there so much that she and John were now roommates. Several years later, he is so used to the joke that she is his wife and that Clark Dill is his boyfriend that he doesn't always remember to clarify for new people who aren't girlfriends of Clark's whom Clark wants to break up with, which sometimes leads to confusion. His family knows these are supposed to be jokes, but all (with the exception of his mother) are agreed that at some point John - the strictest Catholic in a fairly strict Catholic family growing up - has somehow ended up in a bisexual non-marital polycule.